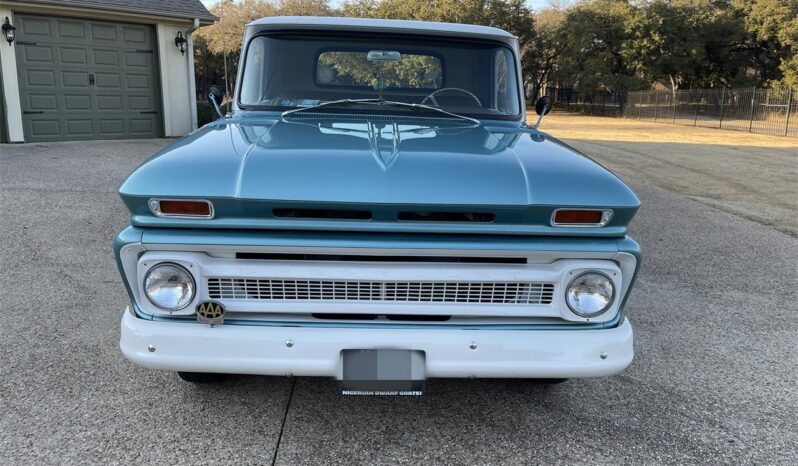 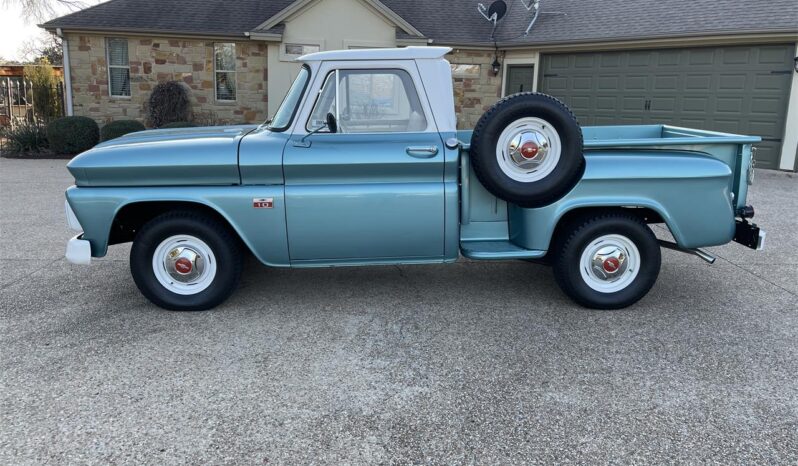 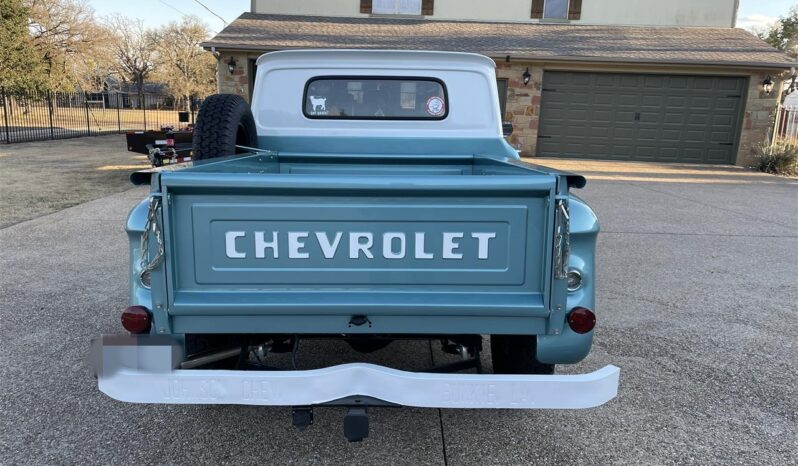 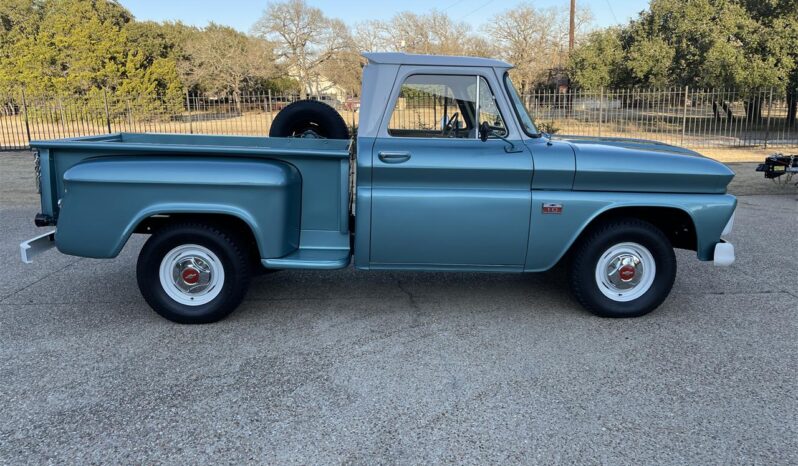 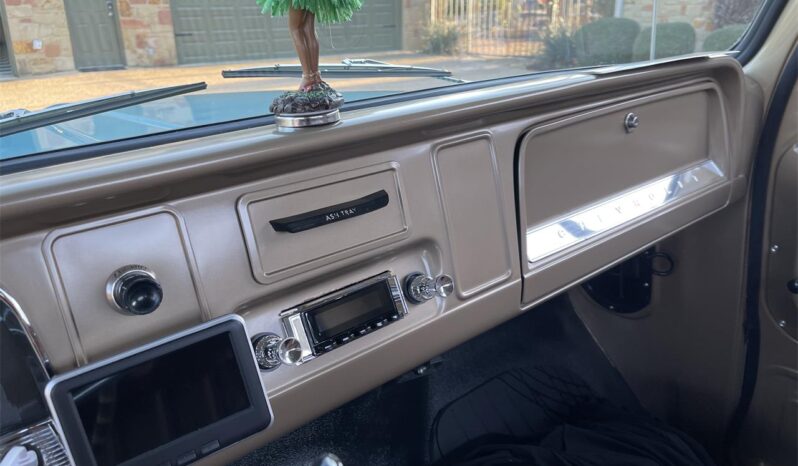 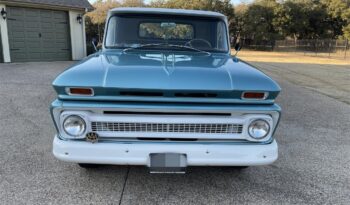 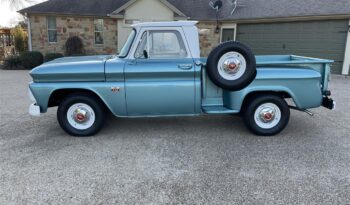 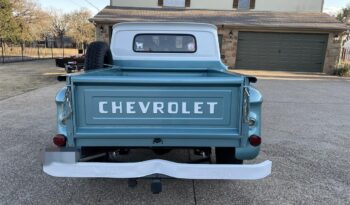 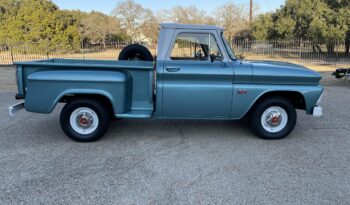 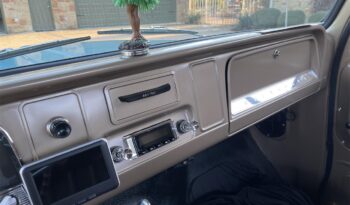 You see a lot of restored trucks these days, vehicles that have ostensibly been upgraded to make them more functional, but that ultimately fail in keeping up the spirit of the original. That's okay in some instances, but so many of them just go too far and erase all that's wonderful about an old vehicle. This 1966 Chevrolet C10 pickup is a linkage to the past, when a restoration of a vehicle meant exactly that: restoring to original. The frame-off restoration of this beauty did that   exactly, even though it looks better than it did originally. 1966 was the final year of the 1st generation C-10, the restorers picked a great platform to start, choosing a straight and very solid truck with less than 90,000 miles on the clock. Turquoise Metallic and White is how it came out of the factory, although the repaint is of a high quality not yet seen in 1966. It looks like an old truck should look and even though the turquoise is somewhat of an unusual color for a pickup, it suits this old workhorse just fine. The mid-60s Chevy trucks are stylish enough to make folks stop and stare as they drive by, with the white top and white accents providing great contrast that complements the look perfectly. It's definitely no-frills, with minimalist detailing, a painted front bumper, heavy-duty rear bumper (engraved with this truck's hometown dealership, just like it would've looked in '66) and a stepside bed complete with a mounted matching spare.  A 2-inch receiver has been added to the bumper along with electrical hook-ups.  A wireless backup camara is also provided. The wood in the bed is so darn nice you'll think twice before filling it with dirt, but it certainly capable, further strengthened with beautiful paint-matched slats and interior walls, and bright chains on the tailgate. The interior was fully redone back to stock as well, with a very comfortable Saddle Tan bench seat wrapped in durable vinyl. A vinyl floor helps with noise and heat and sprays right off with a hose, and along with the metal door panels and oversized steering wheel, everything inside reminds you that this is a working-class vehicle from the past. Factory gauges are clearly original and perfectly restored with the odometer accurately reflecting the current, original mileage on the truck. In 1966, turn signals were not standard equipment in Chevy pickup trucks, but thankfully there is an optional factory stalk installed inside the original column. There's a new AM/FM/ stereo system in the dash and it sounds quite good that includes a single dual speaker.  Seatbelts seems to be the only deviation from stock. There is the original, numbers matching 250 cubic inch Inline 6 which has been there from day one. Technically classified as the 3rd generation Stovebolt motor, it's factory-rated at 155 horsepower, and because this particular motor only has approximately 1,800 miles on its rebuild (as does the entire restoration), it's shockingly smooth and torquey with a great six-cylinder soundtrack that's quite different than what you'd expect. It starts right up, just pull out the choke, don’t touch the gas, and start.  I had an electric fuel pump added that was professionally installed and it tucked away in the side frame out of site. It has the original 3-speed manual transmission that manages the gears with ease and is extremely pleasurable to shift. Underneath, it's just as clean as it was on the original showroom floor, with a chassis and suspension components that are practically clean enough to eat off. A factory exhaust system with a correct muffler sounds wonderful and it sits on painted white steel wheels with chrome Bowtie center caps for a truly old-school look. Recent 235/75/15 Goodyear blackwall radials have been fitted and they're tall enough to fill those big fenders.  The battery is less than a year old and includes a topper to permit it to look vintage.  The original radiator has been replaced with an aluminum radiator with a manual electric fan (the original fan is still fully functional).  The original radiator is included, it doesn’t leak, and in reasonable condition.  The hose clamps are also vintage.