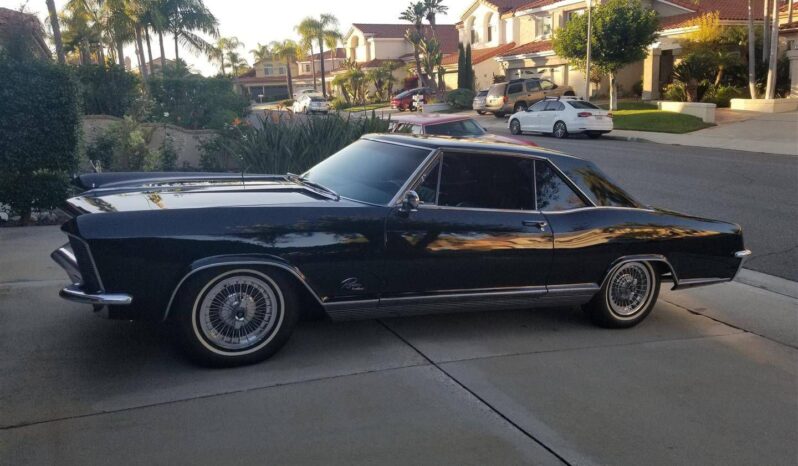 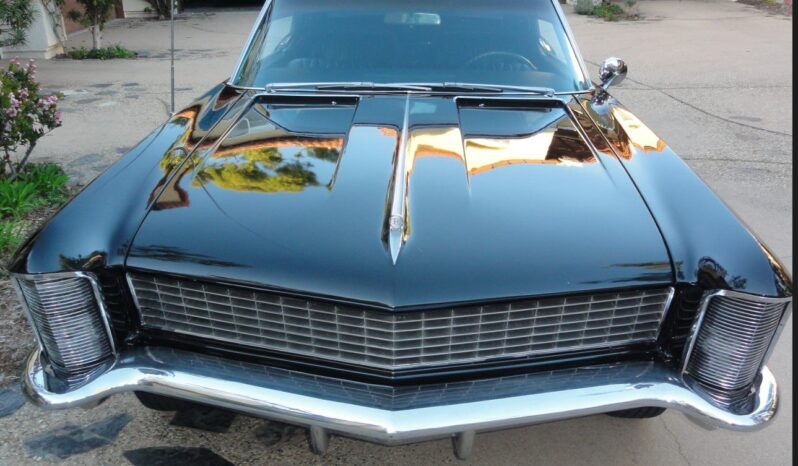 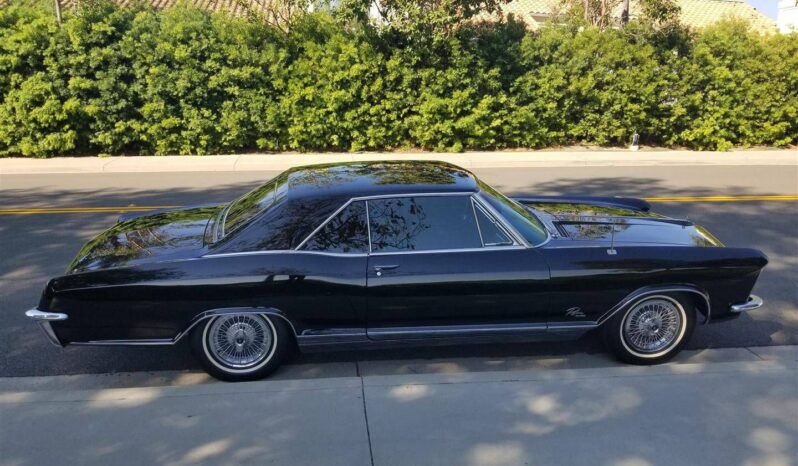 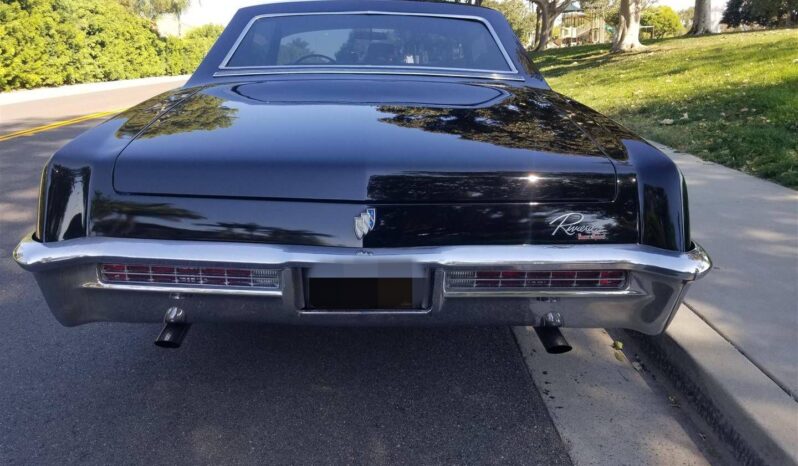 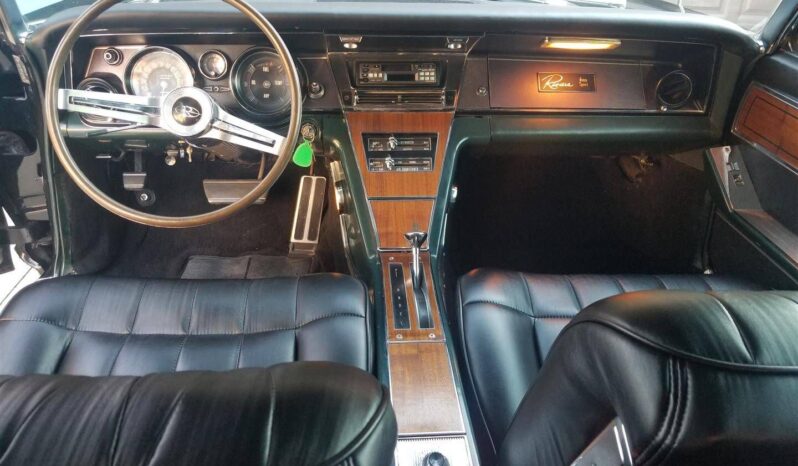 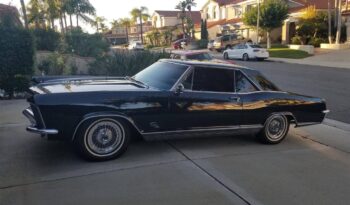 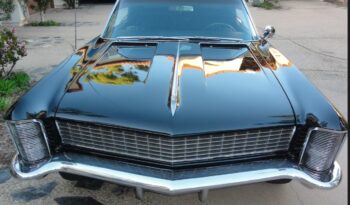 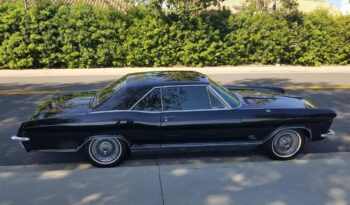 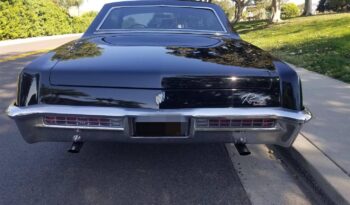 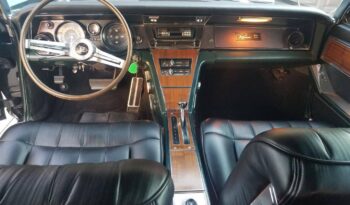 Immediately well received and seen as the first real threat to the Thunderbird as a personal sport coupe, the Buick Riviera was one of GM design chief Bill Mitchell’s most dramatic accomplishments. The design achieved iconic status when the 1965 Buick Riviera introduced vertically stacked headlamps hidden behind clamshell doors that blended with the rest of the grille. This example, in black, was reportedly refurbished in 2010 during the previous owner’s longtime ownership in Arizona. Acquired in 2012 by the seller, who reportedly has put only 920 miles on the car since the 425 V-8 engine was rebuilt that year, this 1965 Buick Riviera GS has also had an electric conversion done on the headlamp doors, and has front disc brakes. Per the seller, this Riviera is powered by a replacement 425-cu.in. V-8 engine that was rebuilt in 2012 by Colangelo Automotive Repair and Classics. It is based on a 1964 425 block that was bored and honed. The crankshaft was polished, and the heads and valvetrain were also refurbished. Additionally, the twin 4-barrel carburetor and the distributor were also rebuilt. The engine is said to start, idle and run well, with perhaps “a couple of oil drops right after a long drive, but no leaks while sitting.” The engine exhales through a 2.5-inch stainless-steel exhaust system that was installed in 2012, while the complementing three-speed automatic transmission is also said to “shift perfectly.” According to the seller, the exterior color of this Riviera was Seafoam Green, and it was repainted by the previous owner. There is no known rust in the body, the seller notes, but the bodywork history of the car prior to the color change is unknown. The seller also reports a few minor scratches in the paintwork, but that it is generally in “very good” condition. The same goes for the exterior trim and chrome, which includes the Riviera’s signature ribbed rocker moldings. There is some visible wear and pitting in some of the chrome, per the photos. Additionally, the glass and seals are reported to be in “very good” condition, with no cracks in the glass and no known leaks with the seals. All of the exterior lighting is reported as functional, including the operation of the clamshell headlamp doors, which have been converted from the original vacuum actuation to electric. Inside, the seats have been reupholstered in black button-tufted leather and the cabin features black carpets and green accents on the door panels and lower dashboard, according to the seller. All are also said to be in “perfect” condition, along with the headliner, which was reportedly replaced in 2010. Equipment includes new deluxe real wood veneer panels, a rear center armrest, lap belts, power-adjustable front seats, power windows, and an Alpine cassette stereo. The seller notes the air conditioning only blows “slightly cold,” and adds that the compressor was rebuilt in 2012 and the system converted to R134a. Additionally, the cigarette lighters do not work, but the seller notes he believes they are functional but disconnected. The left-front quarter window does not open and the vacuum line for the glovebox trunk release button is not connected, per the seller. The gauges reportedly work, but the analog clock does not, and there is also some visible wear in the dashboard trim and a crack in the two-spoke steering wheel. A factory Buick radio is included with the car. The chassis, suspension, and brake components are reportedly in good order, with the only known issue a missing parking brake cable from the pedal to the “Y” junction under the car. The front end was rebuilt in 2012 per the seller. The original front drum brakes have also been replaced with disc brakes, which are said to provide “excellent and crisp” braking performance. The power-steering system and shocks are said to be free of leaks and the car rolls on 15-inch steel wheels with factory wire wheel covers, which are said to be in “very good” condition, with some light visible wear, but no reported damage. They’re paired with Mastercraft radial tires that are reportedly nine years old and show 5-mm tread depth remaining.