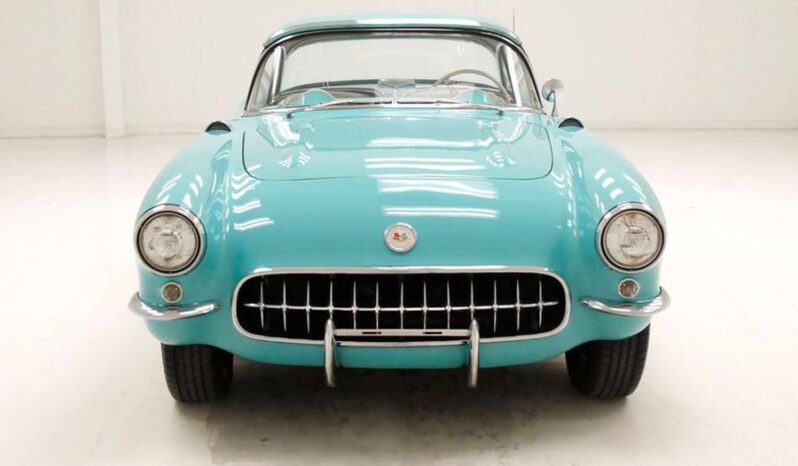 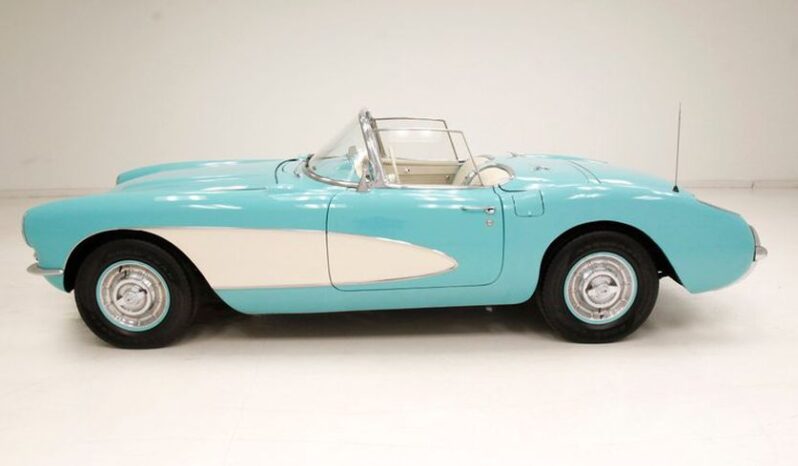 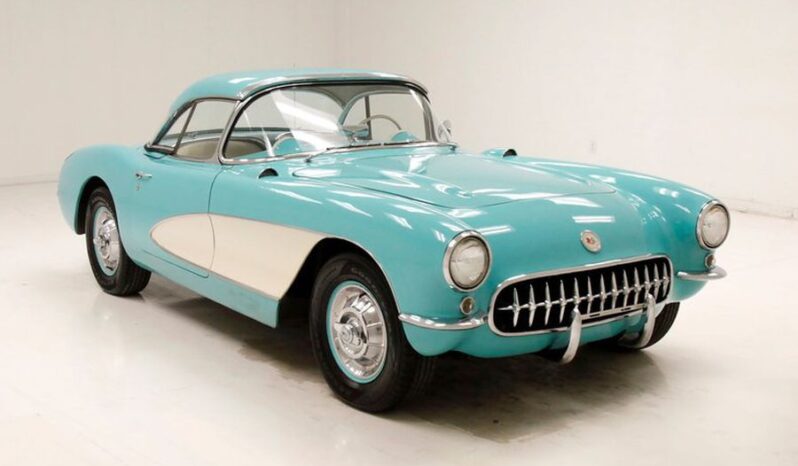 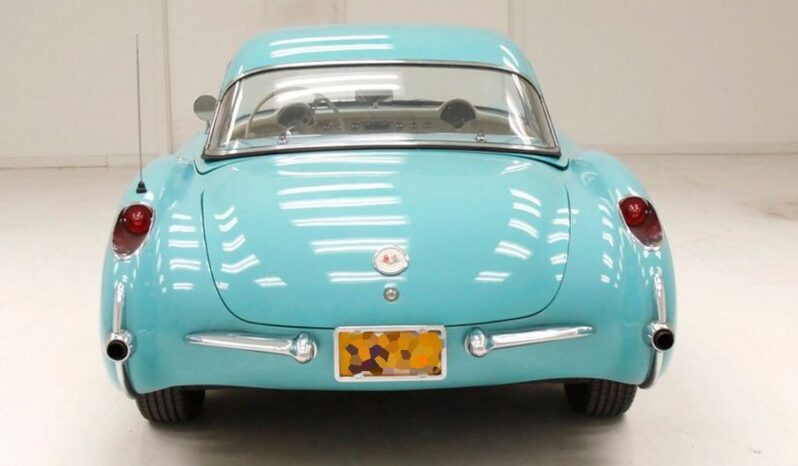 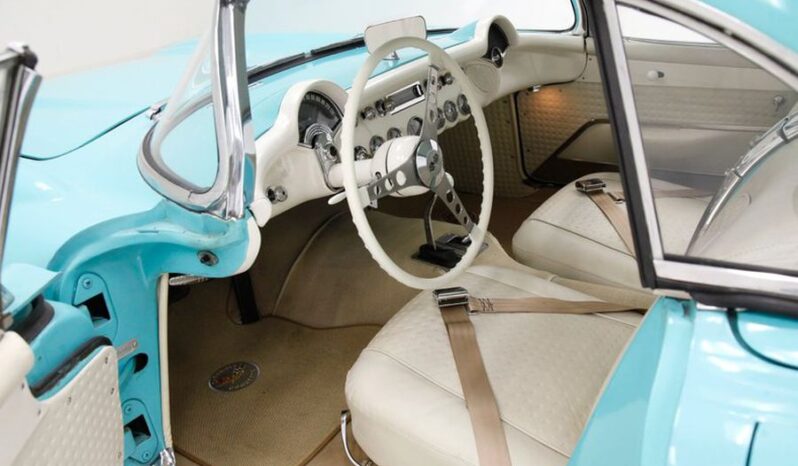 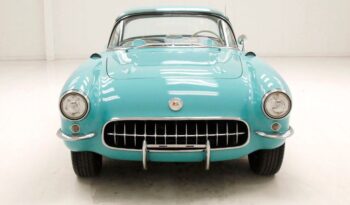 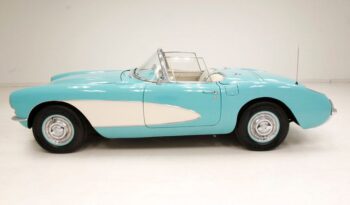 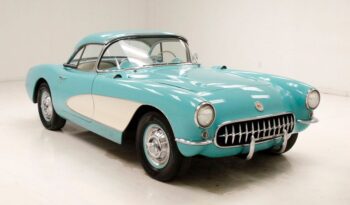 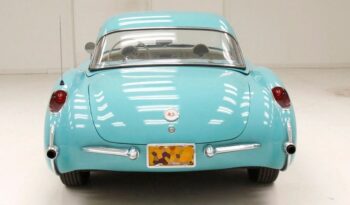 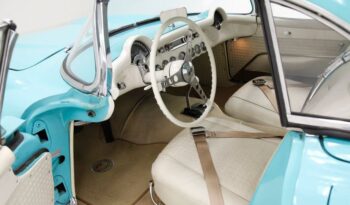 Pushed toward high-performance and racing, principally by its designer, Zora Arkus-Duntov, who had raced in Europe, 1957 Corvettes could be ordered ready-to-race with special performance options, such as an engine fresh air/tach package, heavy-duty racing suspension, and 15 by 5.5 in wheels. Sales volume was 3,467, a low number by any contemporary standard and less than 1954's 3,640, making it the third lowest in Corvette history. Fuel-injected models were in short supply, yet 1,040 were sold. For consignment, a nice version of the 57 Chevrolet Corvette. This 5th model year of the first generation has all the right stuff right down to the awesome paint color scheme dripping with mid 50's styling, new brakes, and a hardtop and convertible. Fiberglass makes up the body of this Cascade Green body painted car with a white corvette cove on either side. Paint is showing some chipping, and fiberglass some cracking especially in the seams of the trunk lid, fenders, and near the gaps. There is evidence the car may have been repaired on the passenger's side due to a light sideswiping accident. Styling for this car is just beautiful with a Ferrari inspired grille, single headlight on each quarter, and wrap-around bumper-ettes on the front corners. In the center are two vertical bars. The rounded hood moves to the wrap around glass of the front windscreen and is trimmed with nice chrome. Just in front of the windscreen are 2 vents on either side at the back of the front quarter tops. The cove is trimmed, and the rear of the car uses the undulating line with the curved down rear quarter tops with vertical tail lighting almost looking up at the sky, but closer inspection reveals they are inset and actually have rocket nose coverings. The curved rear split bumper starts at the plate holder and thins out until it gets to the round quarter panels. The rounded interior ends of this bumper serve as the plate lighting. On the edge of the rear rounded quarters are more chromed trim pieces with a peek through exhaust on either side. Gaps for the top as they meet the body on the rear deck are inconsistent. This holds true for the tan canvas convertible top as it will not go flush with the panel mostly on the passenger's side. Also a few faults are noted by the photos in the top. The hardtop also has a nicely curving wrap around rear glass. Black wall tires are on all 4 corners and these are capped with faux knockoff hubs with just a hint of turquoise at the edges. The styling continues with the door panels that have a cream padded sill that rolls down to a smooth more white plastic panel which is above square embossed dimples in a cream vinyl panel. Seen here are the power window toggles and just above more white molded plastic for the armrest which melts not a lined up brick pattern stainless panel for the bottoms. Inside, reminiscent of the 55 Bel Air is the dual fan dash which has the speedo in front of the driver, and then a series of semicircular bottom edge cream covered metal makes room for a series of gauges to float within these spaces. Above is a lineup of knobs and pulls, as well as the centrally mounted radio. On the passenger's side is another fan which also serves as the speakers to the radio. The rest of the dash on either side curves into the doors. Cream vinyl covered buckets in a bomber style fit nicely inept the rear metal tones and have a metal storage vertical space between them. The bombers have smooth bolsters and more square embossed dimpling in their inserts. Noted the VIN plate has been moved from the steering column and is now in the driver's door panel on the front quarter. Gaps for the tonneau are just a bit off, and below nice tan woven carpeting with no pile is noted and very clean. A 265ci V8 which is not original to this car but of the era, sits in a clean engine bay. It has cast ribbed valve coverings and an orange block. On top are dual 4-barrel carburetors, and behind this mill to spin the tires is a Muncie M20 4-speed manual transmission circa 1966/67. The rear axle is courtesy a 1955-56 Corvette, (casting 3703906), and has a BB stamping code on the carrier denoting it is a 3.55 ratio. Also, items to be noted the engine block looks like it has 2 areas of welding that may be covering some previous damage. Further investigation will be warranted to make your own judgment. Black painted straight rust-free steel is seen throughout, with the X frame and floor pans and rockers. Independent coil spring suspension is noted in front and on back simple leaf springs. Drum brakes are on all 4 corners. There is a dual Thrush exhaust snaking its way rearward, ending up going right through the edges of the rear quarter trimmings. This is one of those cars you really want to drive, but feel like you need to wrap yourself in plastic prior to entering. We got in with our shoes off and started this beauty which fired immediately. A great sound emanated from the exhaust, and we gently popped the clutch, and began our test drive. It drove great, shifted smoothly, steering was with ease, and handling was nicely...well...handled! A nice experience. 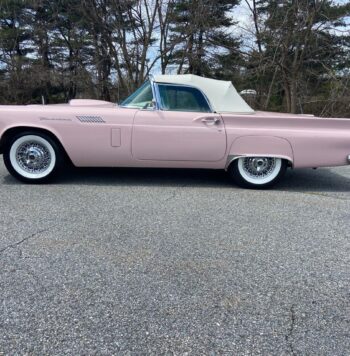 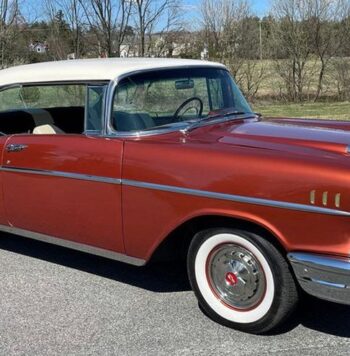 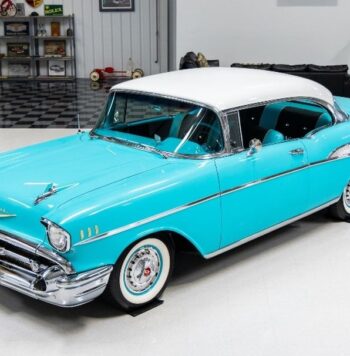