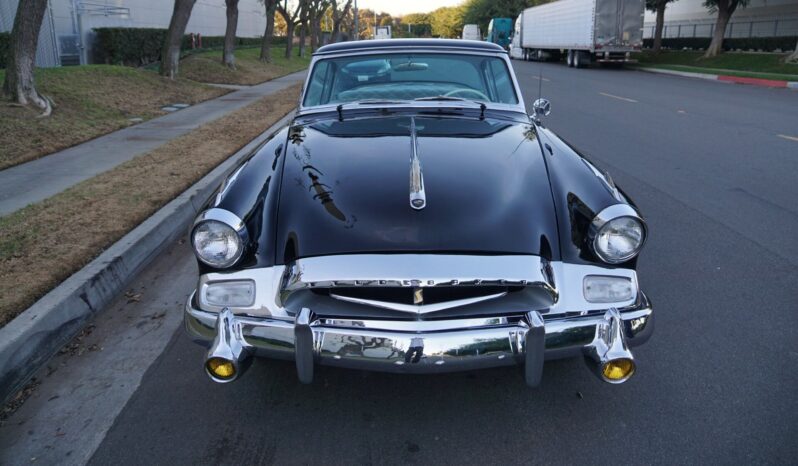 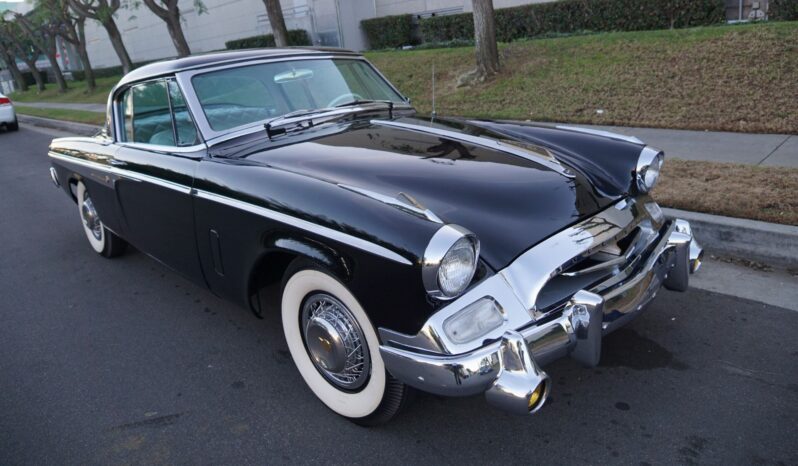 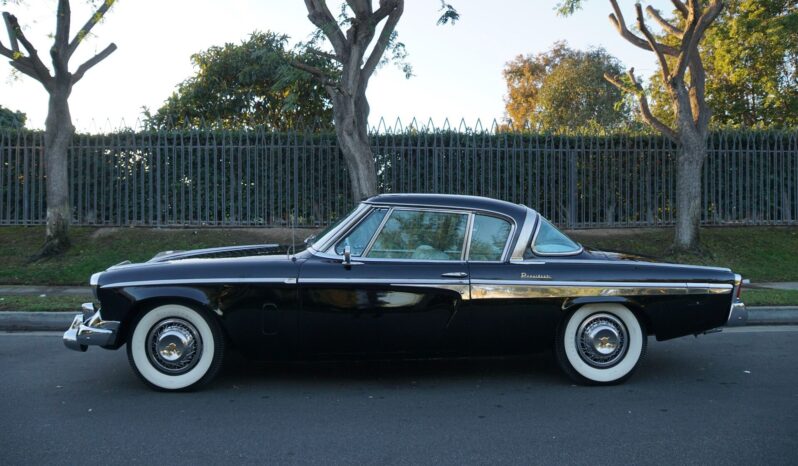 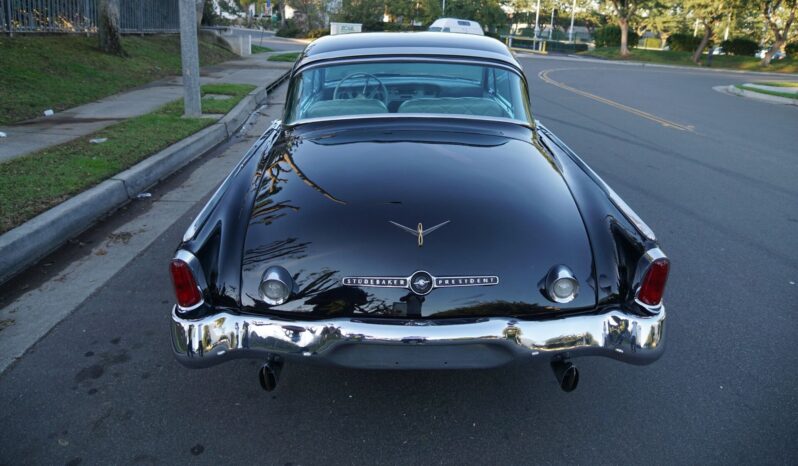 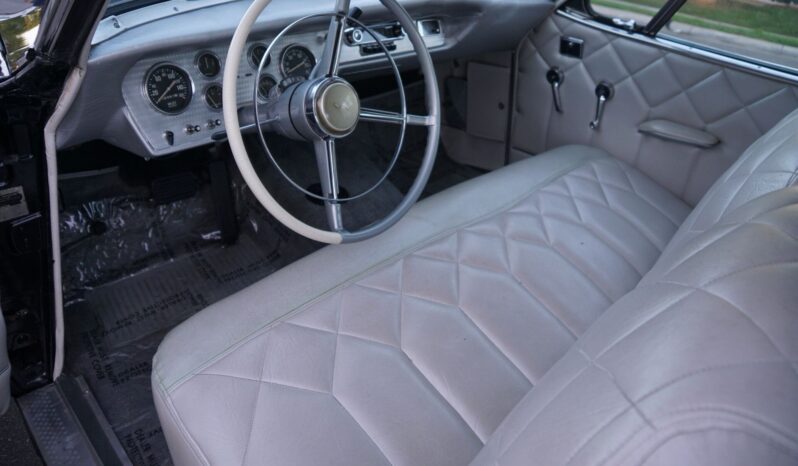 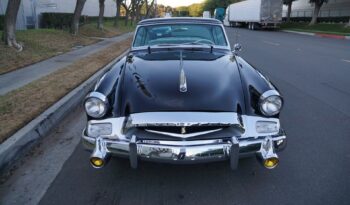 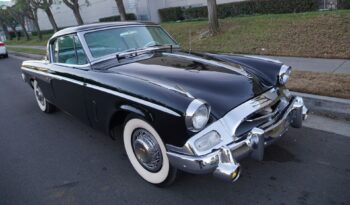 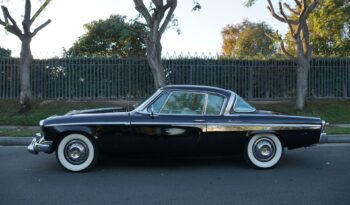 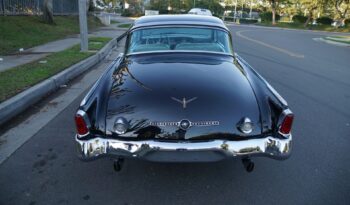 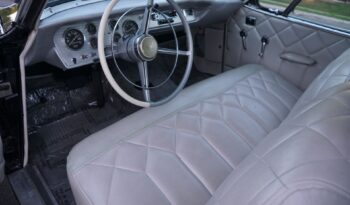 The President State Speedster was Studebaker’s top-of-the-line coupe for 1955, costing about $800 more than the standard President State coupe. It featured a distinct luxurious interior and came equipped with most of that model’s options as standard. The basic design was, of course, a continuation of the stunning, Euro-influenced “Loewy coupe” that had debuted for 1953. Incidentally, that car had actually been designed mostly by Robert Bourke working in Loewy’s studio, with direction from the renowned industrial designer. For the coupe’s 1955 refresh, Studebaker built 20 President Speedsters for auto shows and then put the car into production at mid-year, making just 2,215. The restyle bulked up the front bumper and added more chrome trim, but retained the sleek profile of the 1953 design. Studebaker had revived both the “President” and “Speedster” badges from its 1920s model line. The seller describes the 259-cu.in. OHV V-8 with four-barrel carburetor as “original factory-correct.” The engine was rated at 185 horsepower and 258 lb-ft of torque when new, which was impressive for the displacement. There is no information on whether it has been rebuilt, but Studebaker V-8s were known to be sturdy to the point of being called “overbuilt.” The engines used forged crankshafts and connecting rods, along with large bearing surfaces. Solid lifters were used with forged, adjustable rocker arms, and the Stude V-8 had a gear-driven camshaft. No smoke, leaks, or weeps are indicated. The Borg-Warner three-speed automatic transmission has no reported issues. The seller indicates that this car is fully rust-free, with no issues in what were known to be this model’s rust-prone areas, including the floor and trunk. The age of the Velvet Black paint respray is not given, but no blemishes are reported, and the finish appears to be in excellent condition, per the provided photos. All chrome is said to have been redone, and it seems to gleam in the photos. All Speedster-specific trim is affirmed to be intact. The model included the center chrome strip on the hood, side moldings, fog lights in bumper nacelles, and the oh-so-Fifties fishtail-shaped tailpipe extensions. The car’s trunk appears to be spotless in the photos. The Speedster’s stainless roof band predicted a trend that would pick up steam in later decades. Studebaker was aiming high with the President Speedster, as evidenced by the “shoemaker-stitched” diamond-quilted pattern leather upholstery and luxurious demeanor. This car’s Ivory cabin is described as “fully restored and in top condition,” throughout, and the comprehensive photos support this description. This model came standard with premium features for the day, including front and rear armrests, electric clock, tinted glass, cigarette lighter, triple horns, two-speed electric windshield wipers, pushbutton radio, and more. The padded vinyl dashboard top was billed as a safety feature. The Speedster instrument panel features a full array of white-on-black gauges and an engine-turned applique. The seller reports no issues for the interior, nor any needs. The President Speedster was a sizeable car, 204 inches long on a 120-inch wheelbase. The model came standard with power steering and power brakes, and the seller reports no mechanical issues or leaks for any chassis components. Photos show a very clean underside. The simulated wire wheel covers were included with the Speedster model and the tires are reproductions of the wide whitewall style that was also originally standard.