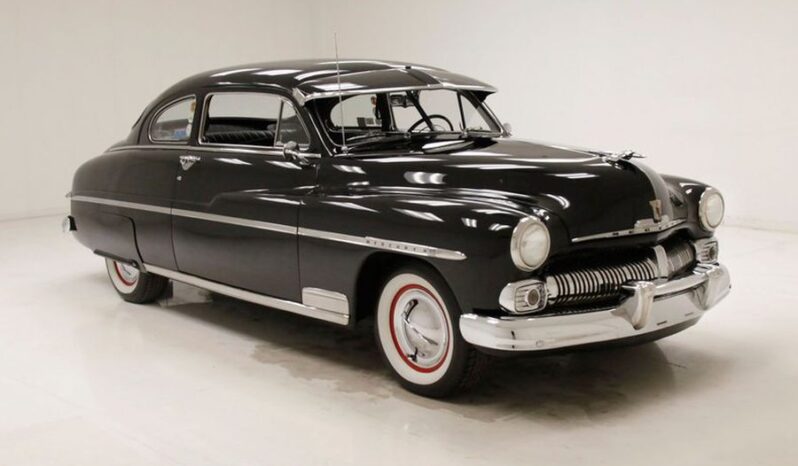 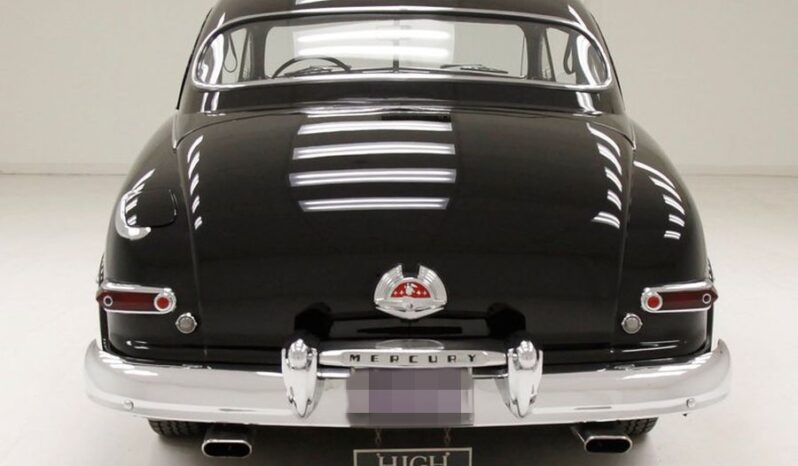 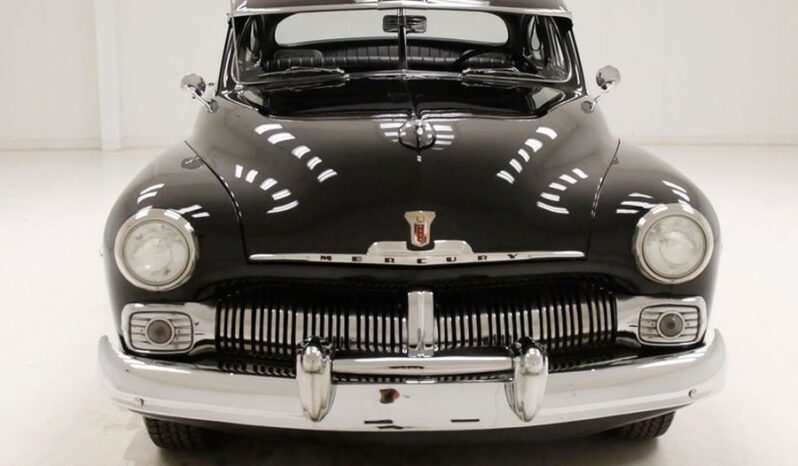 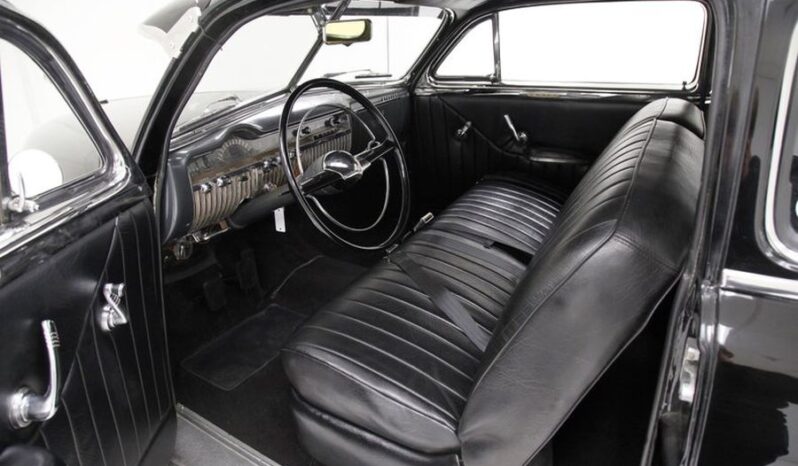 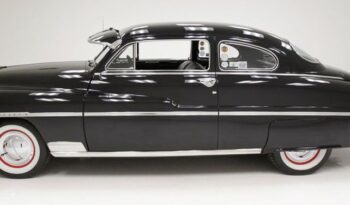 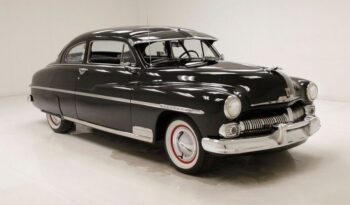 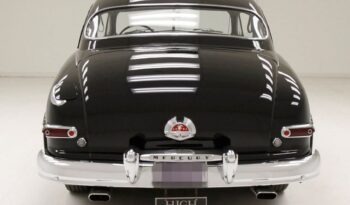 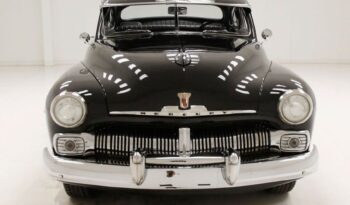 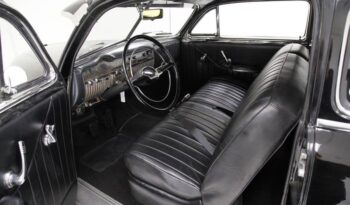 1950 Mercury Club Coupe. With dauntingly small numbers of these cars surviving, let alone being restored, this is a hen's tooth of a consignment. Dual Strombergs feeding a 255ci displacement flathead V8 gives us our Eight designation, and at the turn of the new decade it's the best it gets as to the design. Aerodynamics were a second thought in the day; however, this car has the design of a sleek rocket ship, albeit in Buck Rogers heavy form, but still sleek and swept. Big chrome adds to the look, and weight, which nearly eclipses 2 tons! The beneficiary of a restoration in the early to mid 90's, presenting nicely inside and out, and mechanically sound. Grab this baby and start crowing about it. Picture an elongated bubble, all round and shiny that starts out with a tastefully large grille with a tastefully large bumper below. Add on 2 rectangular parking/signal lights with tastefully large bezels, a big badge above and the beginnings of a bulbous hood topped with a stylized rocket/bird hood ornament leading the way. Single headlights on fenders that tastefully bulge away from the hood and run to the back dying into a straight panel on the second set of doors. A few more bump outs for the rear quarters, a trunk lid that bulges slightly upward from those quarters and wrap around taillights framed below by another tastefully large rear bumper and dual pipes protruding from underneath. A rounded roof line with rounded windows, chrome surrounds along with some sexy rear skirts, and we have the Buck Rogers rocket look. Lest we forget the side spear and dish wheel covers with their wide white wrappings for finishing off the bottom end. All this rocket-like menagerie is bathed in Glasurit Deep Black, showing only a few chips and inclusions. Swinging open the long sleek door and we are met with a black covered door panel that has a mix of smooth leather on top and a horizontal cut in of tuck and roll leather on the lower section. This beautiful leather plays out on the seats with clean tuck and roll uppers and lowers on the front split bench and a back seat bench just like the front only add on some big arms, and we have room for 6. Black carpet floods the floors, and up front above this carpet floats the dash with its dark gray dash top, and mostly chrome ribbed dash front and instrument surrounds. We note the signatures of world renowned car customizers Darryl Starbird and Gene Winfield on top of the dash. These are all clean and looking great and are fronted by the original steering wheel, fashioned out of black bakelite with a round chrome horn rim just inside the bakelite. A black headliner also in supple leather is above. Taking a peek under the hood, and we see a nicely restored engine block painted green presenting as a 255ci V8 that has been bored .030 over and has had an Isky camshaft installed within. During the rebuild the heads were shaved and sitting atop is a silver intake manifold and dual Stromberg 2bbl carburetors. The carbs were recently rebuilt using genuine Stromberg parts. A 3-speed manual transmission is on and sends power back to a rear axle weighing in at 3.54. A big shout out to the twin chrome coolant pipes, generator, and air cleaner horn assemblies. Underneath we are met with a sea of black. A rust-free X frame with no rust body hangers, floor pans and wheel wells. No invasive rust is present, and we only note some road dirt and surface rust on the suspension. Independent coil springs for front and leaf springs for the rear along with 4-wheel drum brakes to provide the woah. Dual exhaust snakes its way back along the chassis and ends under the rear bumper with rectangular chrome tips. No mufflers are present on the exhaust system, so we already know this car is going to sound lean and mean. Slipping inside this earlier restoration it retains its sparkle and je ne sais quoi. It fired right up and idled with a subtle roar. Smooth take off and decent stopping, as well as tight steering with some body roll, but it's a 2 ton car so it will not carve a curve like those of less stature and similar structure. All functions were operational during my drive, and I certainly felt a bit like a rebel without a cause. Holding its own very nicely, a few minor faults in the exterior paint, and the interior is just fab. A nice engine and bay, and structurally sound with no rust to speak of. It's a rarely seen car, and even rarer to be seen in this condition. Fluff your feathers, and strut proudly to the next car show where you can grab one of those elusive ribbons for your mantle. Cock a doodle doo! 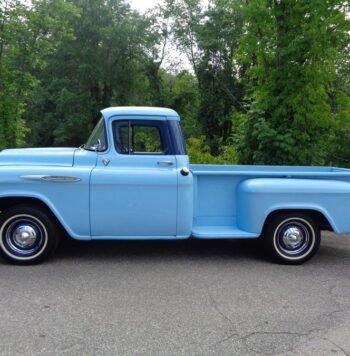 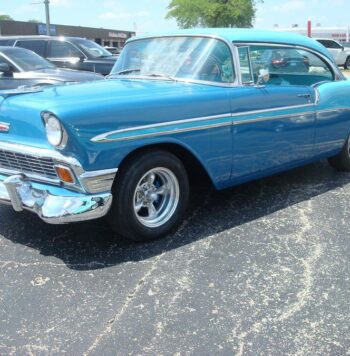 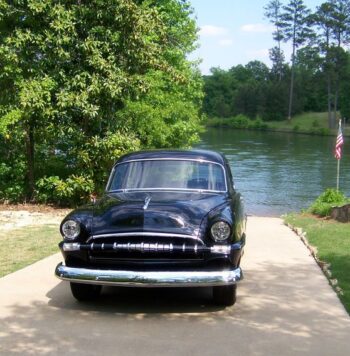 1953 Plymouth Cranbrook 2dr Coupe
Jack Long
$19,000
64000 mi
We use cookies on our website to give you the most relevant experience by remembering your preferences and repeat visits. By clicking “Accept”, you consent to the use of ALL the cookies.
Do not sell my personal information.
Cookie SettingsAccept
Manage consent