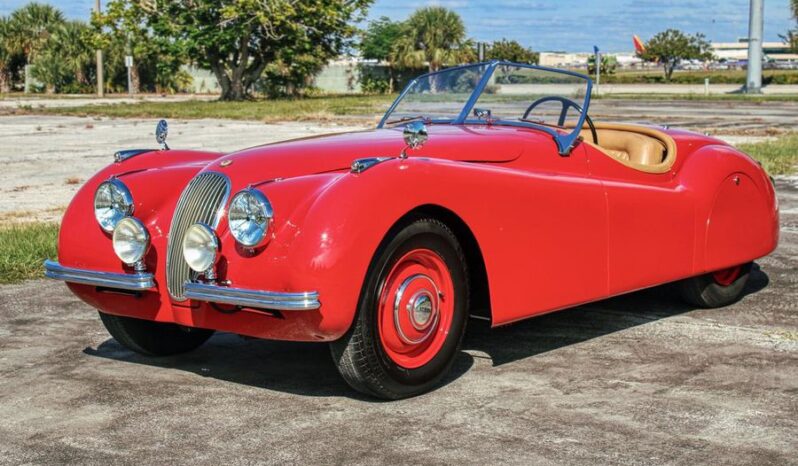 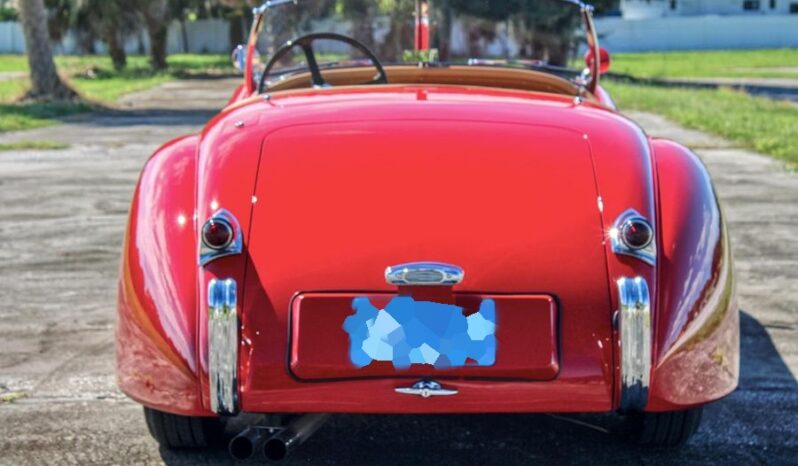 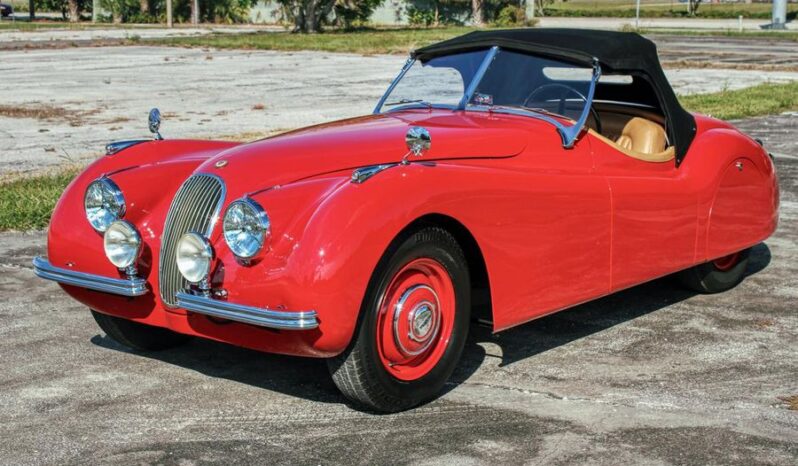 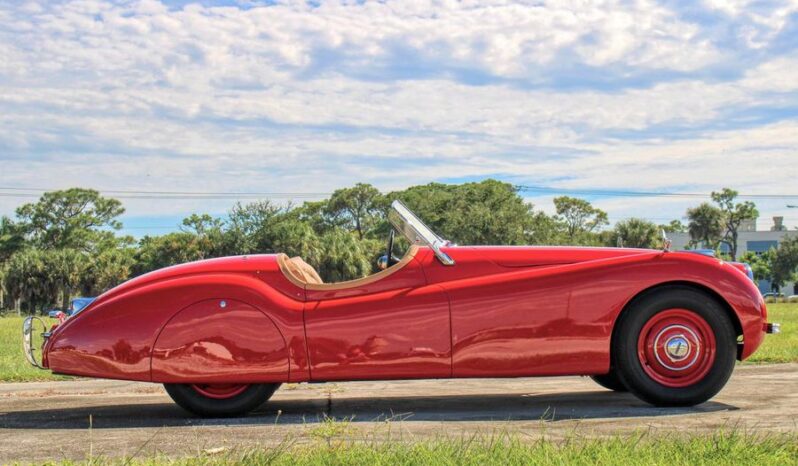 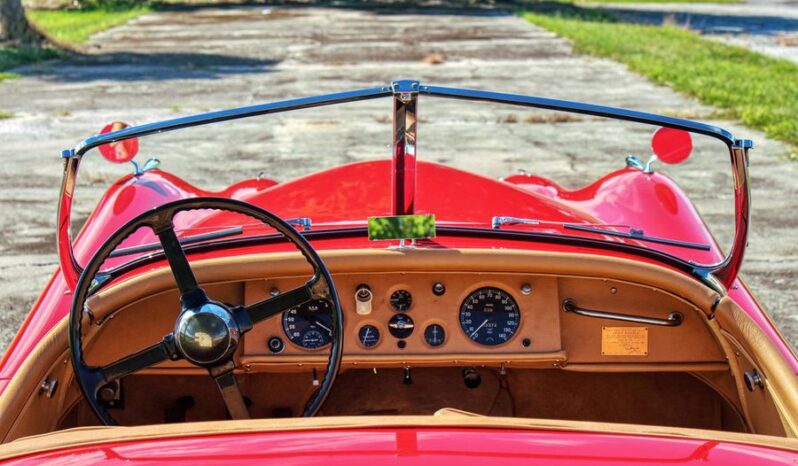 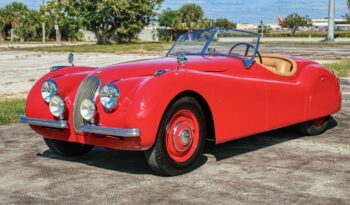 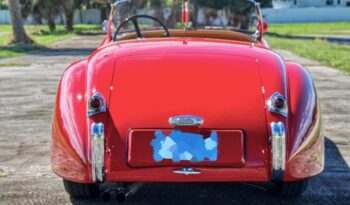 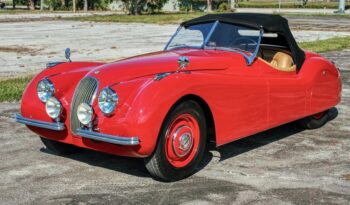 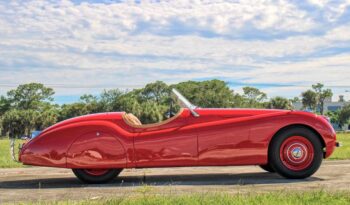 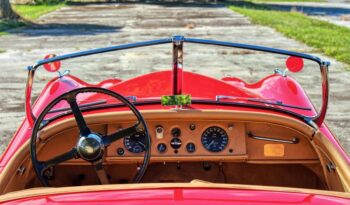 From introduction at the 1948 London Motor Show, Jaguar’s brilliant XK120 stood in stark
contrast to every other sporting car available at the time and forced every competing
manufacturer back to their respective drawing boards. Originally conceived simply to showcase
Jaguar’s all-new XK twin-cam engine while its intended Mark V saloon chassis was not yet
ready for introduction, the XK120 was, according to Jaguar author Paul Skilleter, “…an
afterthought car, an unplanned, accidental offshoot of the saloon range. It enhanced the Jaguar
image enormously, besides earning many thousands of valuable dollars.” The world’s fastest
production car at introduction with a factory-claimed 120-mph top end on tap, the XK120
featured a potent DOHC 3.4-liter 6-cylinder engine, independent front suspension, and
beautifully sweeping bodywork – all at a startlingly reasonable price. Most importantly, the
XK120 quickly earned Jaguar a loyal and lasting following in the lucrative American export
market. Handsome in Dark Red and Biscuit (Tan) livery, this earlier-production 1950 Jaguar XK120
Open Two-Seater (Roadster) is an original left-hand drive example that clearly benefits from 44
years of single ownership and care. It was selectively restored through the years as required,
eventually given a full, body-off restoration. Most recently, the Jaguar received a high-quality
repaint that remains excellent overall, complemented by chrome brightwork of similar high
quality. Rear-fender spats accentuate the sexy Jaguar’s aerodynamic bodylines and presence.
Fully trimmed in Biscuit (Tan) leather, he adventurous XK120 cockpit shows very well and
includes well-restored door panels sporting map pockets, correct door pulls, and proper fittings,
plus beige carpeting that remains nice and presentable. Weather gear includes a quality Black
canvas top and rakish full tonneau cover in Tan. Other desirable features and accessories include the chrome turn-signal housings atop the front and rear fenders, Lucas “Tri-Bar” headlamps and twin fog lamps, and dual fender-mounted
mirrors. Inside the trunk reside a correct air pump and hose, a replacement canvas roll containing
a roadside jack and wheel tools, and a mounted spare wheel with a period style tire. The engine
bay, while not detailed to concours standard, is nonetheless tidy, well-presented, and correctly
equipped with accessories and components including the twin S.U. carburetors and factory air
cleaners. Correct body-color steel wheels and bright factory hubcaps are surrounded by
blackwall radial tires. . hen new, Jaguar and its XK120 utterly revolutionized sports cars on both sides of the Atlantic. Offered in the sportiest body style, this early-production Jaguar XK120 Roadster is a collector-
grade example that benefits from outstanding, long-term prior ownership and care throughout.
Unlike so many cars of its kind today, this XK120 remains true to its roots and refreshingly
unmodified. While extremely attractive and very well presented, this 1950 Jaguar XK120 can
certainly be enjoyed as originally intended and with vigor in its natural element – a nice, winding
stretch of open road! 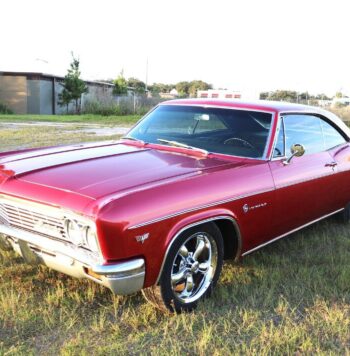 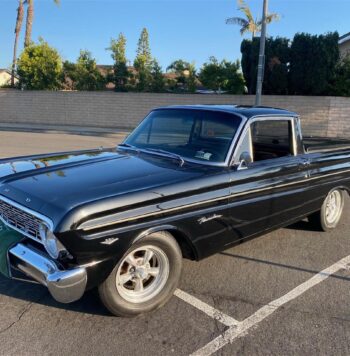 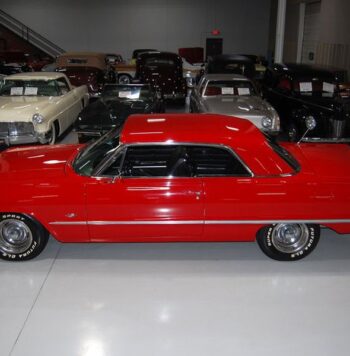 1963 Chevrolet Impala
John Smith
$43,500
1297 mi
We use cookies on our website to give you the most relevant experience by remembering your preferences and repeat visits. By clicking “Accept”, you consent to the use of ALL the cookies.
Do not sell my personal information.
Cookie SettingsAccept
Manage consent