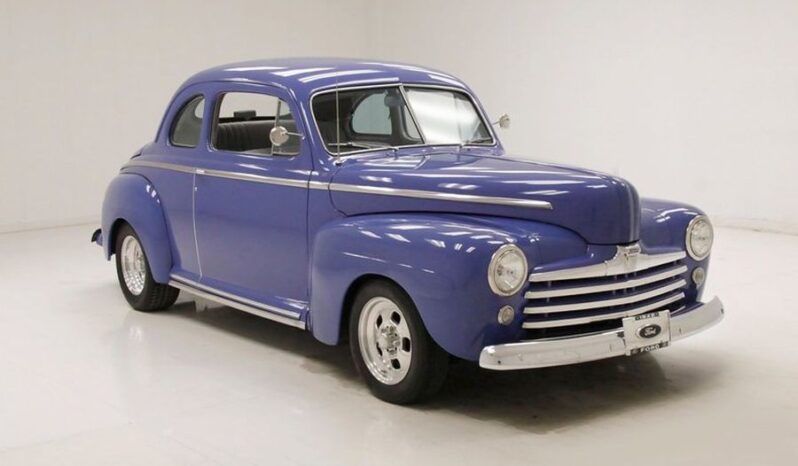 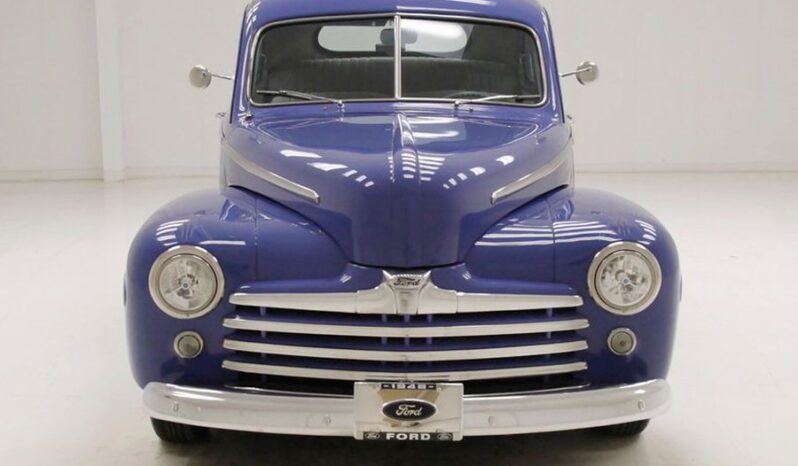 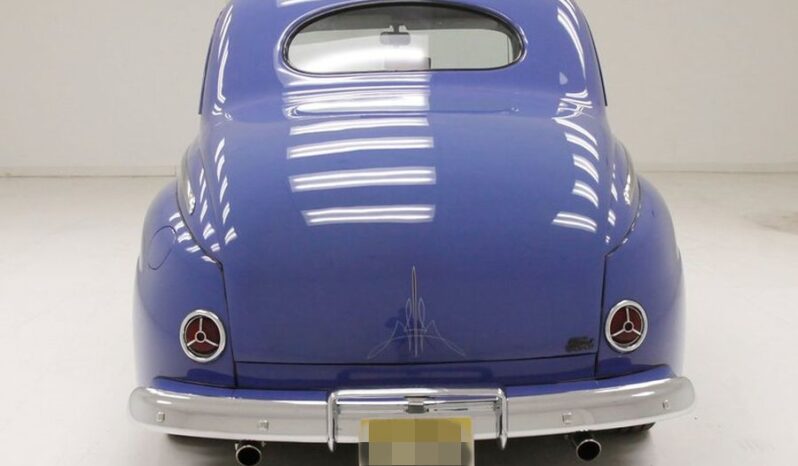 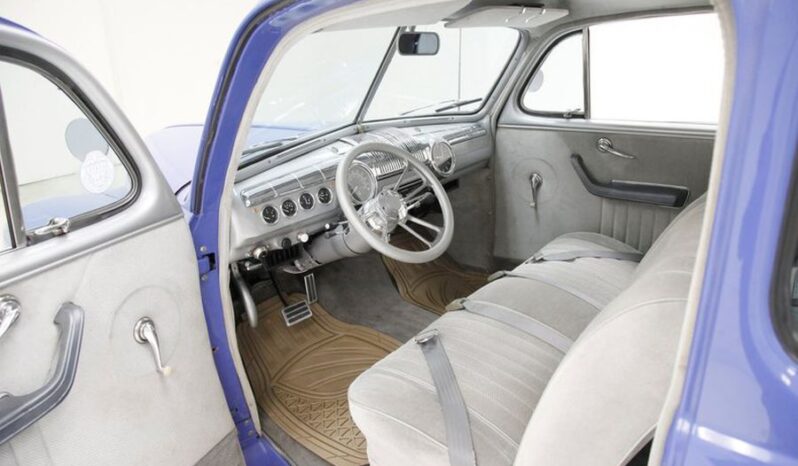 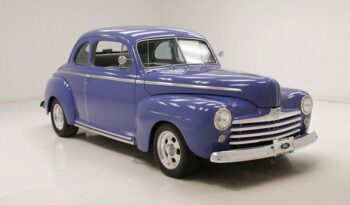 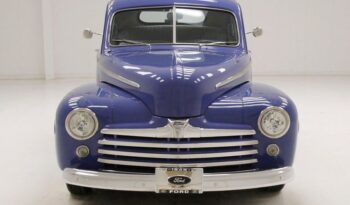 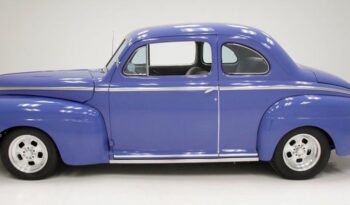 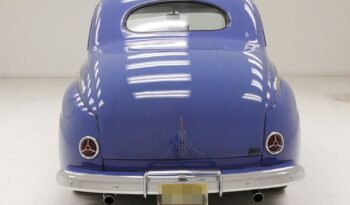 A 1948 Ford Deluxe convertible was the base car that was transformed into ''Greased Lightnin''' in the movie Grease. In the 1984 film The Karate Kid, Mr Miyagi gives Daniel Larusso a cream-colored 1947 Ford Super DeLuxe convertible as a birthday gift. The car was actually a gift to Ralph Macchio from the film's producer. To this day, Mr. Macchio still owns the car. The car reappears in the Cobra Kai spinoff TV show several times where Daniel is seen to still own it. In the third season, Daniel states that getting his first car from Mr. Miyagi inspired him to go into the car business. For consignment, a true classic in true hot rod form. We give you a 1948 Ford Deluxe Coupe that has a few items I'll tickle you with before I suck you in. It is in beautiful periwinkle blue, has a 350ci crate engine, power steering, A/C, and a custom interior. Our consigner states that over $80K was invested into this car and I'd have to say it looks the part. Keeping most of its original charm on the exterior design periwinkle coloring bathes all the rust-free steel the car is made up of. And a fine job of putting this car together as gaps are perfect and there is no rust seen on this car. 4 wide horizontal ribs make up the front grille and this has a shiny bumper below it. Above a protuberant nose creates the hood, on the sides of which begin a stainless-steel trim spear which will run the length of the car. Rounded fenders slowly disappearing into the body have a round single headlight on the front corners. The front fenders frame 15-inch Weld Rodlite wheels with 165/80R15's. The running boards are gone and just a small flair is seen on the bottoms of the doors with a stainless trimming below. The spear continues through the doors and on to the rear of the car where it takes a downward dive to trim the rounded trunk deck. A non-chopped roofline has a front split windshield, and 5 windows go around the passenger compartment. Larger tires for the back in the form of 245/60R15's still wrapping the 15-inch Weld Rodlites. The rear fender bumps out from the bodywork and wraps around the rear of the car which is totally rounded right down to the rear oval glass complete with modern 3rd brake light. On either side are tri-pointed star bezeled round taillights and a shaved trunk lid. A gray pinstripe flourish is taking the place of the trunk handle and just below is a shiny curved rear bumper housing the license plate in its center. Dual exhaust tips are below this bumper. Tasteful, tasteful, tasteful gray tweed makes up the door panels and has some vertical tuck and roll stitching on the outer lower edge just below the darker gray vinyl armrest. Original handles and actuator are in and below is a darker strip of gray carpeting. A front split back bench is in, and it has broadcloth tweed tuck and roll inserts and smooth broadcloth bolsters all in shades of gray. The inserts have buttons on the top of the backs. This is also true for the rear bench same pattern however for this lang chair some padded armrests on either edge. Tweed broadcloth covers all the vertical surfaces including the upper part of the headliner. A gray textured vinyl rims the billet trim spoke steering wheel in rally style and this front a stunning dash. A full metal jacket for this dash in gray and plenty of chrome accenting. 4 smaller round gauges are on drivers left, then a large round speedo with a wide horizontal trimming to its left and above the 4 round gauges. In the center just below the curved vertical ribbed, chromed speaker grille is an aftermarket Dual AM/FM/CD stereo and to be symmetrical on the other side of the radio is a speedo circumference matching clock. Vintage Air has been installed below, and in front of the passenger is a nicely trimmed glovebox. Gray carpeting floods the floors and is well preserved and clean. A nice complimentary interior color, way to top the exterior periwinkle. Under the hood is a 350ci V8, all like new with plenty of bling chromed and polished accents added on. In front is a custom radiator to keep things all cool. On the back is a TH350 transmission 3-speed automatic, and on top a 4-barrel carburetor. On the back is a 10-bolt rear axle. Dual exhaust aids with the big exhale from the 350 cubes. Plenty of structurally strong frame, floor pans and rockers, as well as toe kicks, and underside of wheel wells. A new fuel tank, power drum brakes for the back, and leaf springs can be seen here. Upfront, big power disc brakes are now added, and it has independent coil springs here too. The pans on the engine show no runs, drips, or errors, and a shiny dual exhaust snakes its way rearward, culminating out the back of the car with chromed tips. This car is a perfect example of what it's like to drive a new 74 year old new car. Very tight, quick start, and great runner. Steering is easy, and the ride is just downright great. All functions were working just peachy, and the best work. To describe my experience on the test track would be: TIGHT! A truly wonderful meticulous rebuild from the frame up, having no stone left unturned, and adding some snazzy conveniences on the way. Electronically actuated trunk, A/C, power steering, Weld Rodlite Wheels, Periwinkle paint and plenty of trimmings, we are now entering the twilight zone and are in a new car from 74 years ago! Buckle up! Greased Lightning in periwinkle and gray broadcloth.